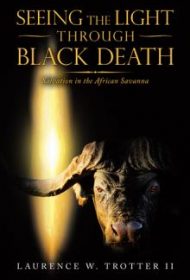 In 2012, adventure enthusiast Trotter found salvation during an African hunting expedition. Trotter was attacked by a Cape buffalo, an animal that hunting experts call the “Black Death.” Miraculously, Trotter heard a voice during the attack guiding him to survival: “Stay on your back,” the voice said. “Put your boots…between the horns and push away with your feet.”

The African trackers and professional hunters who witnessed the attack agreed that “if [Trotter] hadn’t done exactly what [he] did, [he] would have been killed.” Though his mangled shoulder would require extensive surgeries and rehabilitation, Trotter walked away from the attack, attributing his survival to what he believes was God’s voice, sparing his life for the greater purpose of sharing God’s realness with others.

Despite a few typographical errors, Trotter’s memoir is mostly a well written, effortless read, although it bogs down in the beginning, spending too much time discussing Boy Scouts, rowing, skiing, business ventures and arguments over trophy hunting before describing his encounter with the buffalo. These topics do little to support the book’s purpose. Trotter gains momentum in Chapter 7, focusing on his message the rest of the way. Fortunately, the introduction provides an overview of each chapter for impatient readers.

Trotter accomplished his goal of “God being the main character” in this book; the later chapters center on God’s involvement in Trotter’s spiritual and physical healing. While many memoirists fail to connect with readers, Trotter finds the common thread through his story and ours: He believes we all have Cape buffalo stories of miracles and divine intervention, reaffirming “that God is alive…real and proactive in all our lives today.”

Trotter’s testimony should inspire Christians to look for the hand of God guiding their lives and will likely be enthusiastically passed to others.