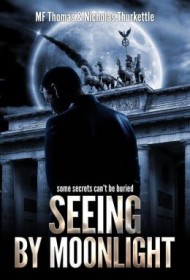 An American car salesman discovers he has powers he never knew about when he visits his native Germany in Seeing by Moonlight, a fast-moving suspense story with elements of historical fiction and the paranormal.

The “present” of the story is 1999, but the narrative builds drama well through numerous flashbacks. After a brief prologue in 1941 featuring FDR and what appears to the president to be a ghost Nazi, the story jumps to 1999 and introduces Alex Pyke, a young man living a charmed life in Arizona. Alex travels to Germany for business, where he eventually comes to understand that he has special psychic abilities and where he meets the mysterious Elise, with whom he discovers long-buried secrets that have ramifications for them both.

Most of the novel’s rewards lie in its revelations, so it’s best not to dig too deeply into the plot. Suffice it to say the book hits many of the genre points in fine form, delivering plenty of action and mystery. The authors do a nice job of weaving in characterization and plot points while keeping the story moving at a good clip.

On the downside, the dialogue in Seeing by Moonlight could be smoother. It gets the job done, but it often lacks the color and energy evinced elsewhere in the story. Additionally, Alex is a touch generic and would have benefited from a more fully fleshed characterization, and the climax could have been more powerful.

Still, a flashback-heavy tale can be tricky to pull off, and the authors do a skillful job of keeping the timelines straight and using the transitions to ramp up the drama. While Seeing by Moonlight isn’t entirely successful, the novel is consistently engaging, and the authors have real talent that should bear fruit on subsequent endeavors.