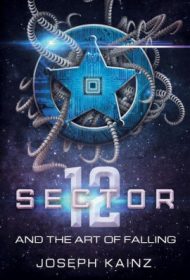 Joseph Kainz’s Sector 12 and the Art of Falling is chock full of military science-fiction action, augmented with his protagonist’s wise-cracking asides and other clever touches of metafiction.

In this sequel to Sector 12 and the Art of Dying, Ranger R 2-12, is back in Sector 12 of the Kill Zone. His Ranger Star, connected to his brain, allows him “to interact with the digital world” to routinely breach electronic/computer systems, and he has an artificial tentacle that was installed when his original Star self-destructed, destroying his arm.

R 2-12 uses the Star and tentacle to the fullest, helping the folks of Crashed Springs on the planet Acan solve a series of complex murderous thefts and fight a grave threat to the planet.  “I may subordinate local laws to the needs of justice,” he admits, as he schemes, slaughters and uses his implanted Star to penetrate every computer system in his rollicking, stumbling way through a series of adventures and misadventures.

There are some truly nice touches here: The action sequences are first rate. And the plot is engaging. The metafiction often arrives in amusing strikeouts (such as: “Infiltration was only going to be viable if their current positioning could be fucked all the way to hell adjusted.”) and comments to readers, such as this description of crab juice: “Tastes like phrem blended with kreel. They don’t have those behind The Wall, though, do they? Okay, I don’t think we share a frame of reference. Let’s just say it tastes pretty good.”

Like R 2-12, Kainz is adroit with computer systems, military tactics, and weaponry, and his aliens are distinct. But, like R 2-12, he too stumbles, too often defaulting to an omniscient viewpoint, rather than staying in the hero’s head. He also offers too much information, such as a two-page aside on “multi-spectral shielding” in the middle of a firefight and wordy descriptions of computer systems. These interrupt the action sequences, breaking reader engagement.  Readers should also be forewarned that there’s an over-abundance of four-letter words.

Although the story’s flow suffers from some less-than-engaging sequences and occasional editing issues (incorrect periods, missing commas, etc.), it offers many rewards and should appeal to aficionados of systems detail and science-fiction/military genres.