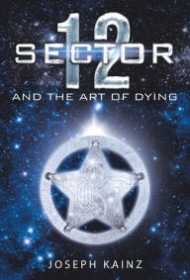 Joseph Kainz’s Sector 12 and the Art of Dying offers up a banquet of rock ‘em, sock ‘em military science fiction, all enhanced with his character’s amusing asides and touches of metafiction.

Ranger R 2-12, called “Rab” (for “rabid”), is a cunning human assigned to Sector 12, a realm of alien and human thieves, cutthroats and desperadoes where Rangers are the only law, out on “the bad side” of what’s called the Wall, “a series of space borne fortresses, minefields, turrets and other nasty things” designed to keep potential invaders out of the alliance of planets’ home space.

Rab is a rascal, practiced in the art of deception who routinely disregards standard operating procedure and exceeds his orders to the point of outrageous insubordination. He’s a self-described combination of “a madman, a principled man and a fanatic.” “I try to be true to Justice whenever possible,” he tells readers. “… I can’t bring her everywhere, but I can take her out for a night on the town once in a while.” When Rab is assigned to rescue a group of Frontier Corps Marines who’ve been “blasted into Sector 12,” he sets about his mission in his usual fashion.

There’s a wealth of action and richly described alien worlds here, and readers will enjoy Kainz’s salty, heroic Ranger who wisecracks to them as he schemes, sidesteps and slaughters his way through a series of adventures, misadventures, and downright calamities. Rab narrates, consistently discussing his choice of words and phrases, crossing out text and interjecting comments, all in a delightfully amusing way.

Kainz knows his weaponry, tactics, and above all, soldiers. There’s a salty helping of four-letter words that may deter some. But if your idea of a good time is sitting around a virtual campfire while “Old Sarge” tells deeds of derring-do, seasoned with wiseass comments, you’ll be delighted as Kainz takes you beyond the point of no return in this well-written, fast-paced, mighty tasty science-fiction stew.