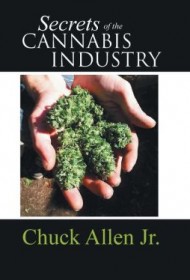 With the rapidly changing landscape regarding marijuana in the United States, Chuck Allen Jr.’s Secrets of the Cannabis Industry is a timely effort.

In it, he relates stories of men and women who, through their entrepreneurial efforts, have carved out successful livelihoods growing cannabis. They are a diverse lot and include: a pizza shop supervisor who sprinkled marijuana on “special” orders; a postal worker who had a secret garden in his basement; a woman who ran a video store and provided marijuana to certain customers. Although Allen says the stories are true, he points out that the names and locations of the operations have been changed, blurring the fiction/nonfiction line.

Through these stories, Allen seeks to guide readers who might be interested in trying their hand at marijuana production and million-dollar paydays. There are tips on choosing and setting up a site and lessons on the pitfalls a person can encounter. But Allen intersperses that material with recurring anti-government rhetoric, including comments about the Trilateral Commission, the Council on Foreign Relations, and progressives, that greatly detracts from the book. In his eyes, America’s marijuana laws are outdated and unjust, put in place by corrupt politicians with ulterior motives. He sees those who ignore the law as freedom-loving pioneers and entrepreneurs who are contributing to society and their communities.

The author’s writing is straightforward and informative, although he tends to make statements that need attribution, such as noting that the cannabis industry is a $60 billion-a-year business. It very well could be, but instead of telling readers where that number comes from, he falls back on “Don’t take my word for it, look it up.”

Secrets offers an inside look at an industry that increasingly is coming into the open. Whether readers want to start their own operations or not, they can learn from Allen’s stories. The political discussion, however, gets in the way and ultimately limits the book’s effectiveness.