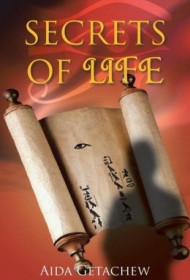 Imagine you suddenly discover you aren’t the normal, edgy teenager from a single-parent home that you thought you were, but a rare descendent of an ancient tribe of gifted people who has the ability to read minds and see the future. Add to this the fact that your ancestry and gift can defeat — or assist—a great dark force desiring to suck all love and joy from the world.

Such is the discovery 16-year-old Beryl Jones makes the day she learns that she’s a prophetess descended from Aya, the sole survivor of a long-ago massacre. Aya was also the creator of the Scroll of Elysium, a magical piece of parchment containing all the things that matter most: hope, love, and happiness. But it has a vulnerability: it can be stolen and used to deprive people of these cherished feelings.

Only Beryl stands between the dark force and the fate of humanity. As she races against this evil, she meets unusual magical beings, some of whom are there to aid her, others to inflict mortal harm. The ride is full of unexpected moments, and readers will feel an urgency to learn what happens next.

Aida Getachew has written an original, enjoyable, and tension-filled young adult fantasy. Her protagonist tells her first-person story in an appealing, sassy and humorous voice, exhibiting all the angst of a normal teenager, including concerns about parents, friends and school — even as she struggles to understand her special abilities.

The only thing hampering the story is that sometimes Beryl’s inner dialogue arrives at the most inopportune moments. Albeit clever, these rants detract from otherwise well-wrought action scenes or engaging interpersonal dialogue.

In the end, that’s a small complaint compared to Getachew’s admirable feat of creating an original fantasy with gripping tension and a spunky, likeable protagonist. Fans of similar angst-ridden, parent-challenged adolescents with special powers — such as Harry Potter and Percy Jackson — will cheer.