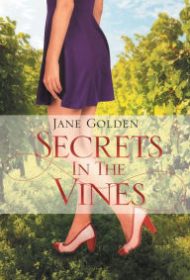 Nothing makes an overworked genre like mystery seem quite so fresh as a story set in an exotic locale. Secrets in the Vines takes this theory to heart, offering up a murder mystery set in the wine country surrounding Romania. It’s a winning formula.

Jeni is bored with life as a diplomat’s wife, but her involvement with a social club for women becomes complicated when one of the members dies at a wine tasting. Then, while trying to help a friend investigate the ownership of a nearby winery, Jeni stumbles (literally) over a body and finds herself a suspect in both deaths. Out to prove her innocence, she very nearly armchair-sleuths her way into an early grave.

Author Jane Golden drew on her own time in Bucharest to set up this tale, and it pays off nicely. Observations about the life of a foreigner trying to make sense of a new culture are spot-on and often funny; thoughts about parking customs and the laconic pace of government reflect an outsider’s tendency to compare things to life at home, while also taking us deeper into the atmosphere. The mystery is gripping, but it’s the setting that steals the show.

Unfortunately, despite terrific pacing and a story that resolves well, the typos begin to pile up, and they slow things down a bit. Misspelled words and incorrect homophones turn up too frequently to ignore, but they don’t negate the overall fun.

Secrets in the Vines is an enjoyable mystery, but it needs a comprehensive copyedit to clean up the spelling errors. If Golden goes that far, perhaps she can add a bit more material as well; at 164 pages, we’re left wanting more of this juicy escapism.