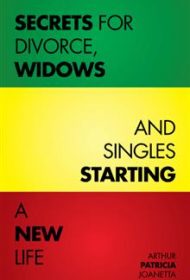 The loss of a husband after 40 years of marriage is certainly disorienting, and many women would welcome an outstretched hand to steady them. That’s exactly what author Arthur Patricia Joanetta purports to offer in her brief combination memoir and manual titled Secrets for Divorce, Widows and Singles Starting a New Life.

Joanetta opens her book with a glimpse of growing up poor and discusses how her mother instilled in her the value of self-reliance. “I am a person who stays by herself. I have been independent long before becoming a widow,” she writes. It’s a solid foundation for a story of resilience in widowhood, but the promise of a woman who taps a strength from childhood is never developed. One of the oddest anecdotes is about her dressing up a mannequin to sit with her in her RV so other motorists won’t think she’s alone. Perhaps it’s meant to be funny or to show resourcefulness, but without further explication, it comes off as bizarre.

The book is loosely structured around a “list” she compiles soon after her husband dies. There’s both pragmatism and poignancy here: figuring out the finances, trying to decide where to live, getting a job, ensuring her safety, and finally, considering the possibility of dating, followed by a question mark. This hints at the conflict she feels as she moves forward from what might have been a less-than-happy marriage. “I said I’m free at last but I felt guilty saying it,” she writes. It’s one of the truest moments in the book.

Joanetta’s writing is accessible, offering glimpses of a feisty, interesting woman. But ultimately, neither the memoir nor self-help elements are developed enough to feel complete. The author notes that she has been encouraged to write in the past and is only now getting around to it. Maybe she will learn to dig deeper in future books. This time around, her effort falters, despite its important and potentially relatable topic.