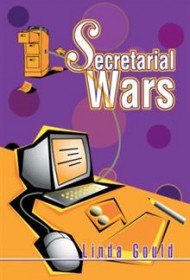 Miriam is a secretary in a governmental agency, the Grants for Peace Council, which sends scholars abroad on teaching programs. But her real passion is writing. She longs to be a journalist, particularly for the Washington, D.C., tabloid The Free Paper, a muckraker that’s a perfect fit for Miriam’s conspiracy theories, which are encouraged by her friend Jocelyn. Miriam is convinced that the European teaching grants are for sale because some scholars are chosen solely for their political connections and contributions.

While she begins a clumsy investigation, controversy strikes at the Washington Redskins football field. Aging and cantankerous quarterback Larry Longford, a good friend of President Bailey, is chosen to be the starter, even though younger quarterback Pete Spencer has proved himself the better player. The president’s involvement in things political — and not —becomes more fuel for Miriam’s inquest.

Gould clearly has an agenda in Secretarial Wars. President Bailey shows overt similarities to former President George W. Bush, and even Rush Limbaugh makes a thinly disguised appearance as obnoxious right-wing radio host Puck Cavenaugh. While Gould writes with such confidence that some readers might salivate over the theories concocted by her characters, Miriam is a lifeless protagonist who is often portrayed as a feeble, catty conformist. Her friends, Jocelyn and Cass, are exasperating for their adolescent obsessions with men they can’t have.

Gould’s story has a solid, engaging plot but fails to deliver an impact worthy of the buildup she spent pages creating. This shortcoming, coupled with a weak lead character, leaves readers with little worth seizing.