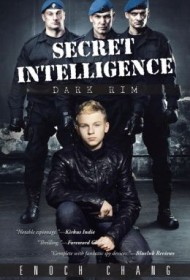 Dark Rim is the first novel in an action/suspense series for young adults, written by 15-year-old author Enoch Chang.

Raised by his Aunt Veinna since he was seven, protagonist Nathan Doyle has only vague memories of his parents. Nathan’s day-to-day life is fairly ordinary, but things change a few days after his 14th birthday, when Aunt Veinna gives him a pendant handed down by his father and discloses the secret that the train crash that killed his parents might not have been an accident.

The following day, Nathan and his best friend Joe are at an outdoor fair when Nathan notices a strange man watching him. When the man turns and disappears, he impulsively follows him, eventually ending up on a narrow street. Eavesdropping on a conversation that he realizes is about him and Joe, Nathan overhears words like “gun” and “spy” and feels that he’s in mortal danger. Soon, he discovers his aunt has been abducted and he finds himself in a cat-and-mouse game involving his unique pendant and illegal uranium sales. Nathan is reluctantly drawn into the role of a young, inexperienced James Bond, complete with fantastic spy devices.

On the up side, the story is original, and a teenage spy character holds definite appeal for young adults. The action, especially near the book’s end, makes for some page-turning moments.

Unfortunately, the text is riddled with mechanical errors, including misspellings, run-on and incomplete sentences, incorrect punctuation and incorrect word choices. Also, the narrative is frequently interrupted by a change of tense in mid-sentence, as in: “Nathan knew any aggressive movement made will make his heart into a burst packet of blood, certain death.” These issues often result in a challenging reading experience.

Still, this young author’s accomplishment and effort should be commended. If a vigilant editor is employed for the coming books, this series stands a better chance of gaining an enthusiastic readership.