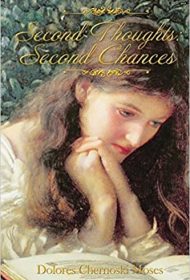 Second Thoughts: Second Chances is an ambitious novel that explores the complex dynamics among one family, focusing especially on Paul, his father Mitchell, his adopted cousin Corinna, and his uncle Viktor.

After a health scare, Mitchell moves from California to Thompsonville, New York, to live with Viktor and Corinna. This is where his family settled after emigrating from Europe, and where Paul has just moved. While Mitchell adjusts to his new situation, Corinna must decide about her relationship with Syd, a computer expert, and Paul, a lifelong bachelor after a failed youthful relationship, must deal with his growing romantic feelings for Corinna, who is ten years younger than himself.

The novel successfully captures the complicated feelings between family members. At its start, Paul somewhat resents his sister asking him to fly to California to care for their father during his medical scare. Mitchell views his grandchildren as spoiled and distracting, while remembering their mother Rachel’s rebellious marriages and love affairs. Corinna, an intelligent and talented pianist and librarian, is conflicted over her feelings for Syd, acknowledging they have no common interests and no passion towards each other, yet also yearning for this relationship to develop.

Thompsonville is also lovingly depicted—a place where historic buildings have been restored to restaurants, businesses, and homes.

The novel is written in a high literary style that effectively depicts the nuances of most characters’ thinking. Unfortunately, such detail sometimes bogs down the plot, as does the author’s often overblown descriptions and overall wordiness, as in this sentence about Syd’s banking job: “Expected commitments spilled out over the days and weeks in a more fluent and demanding way than the always hectic but more or less circumscribed daily regimen on the trading floor.”

In addition, some passages are repeated verbatim right after each other, and some paragraphs are oddly formatted.

Despite such drawbacks, patient readers will find a careful, layered depiction of family relationships in these pages.