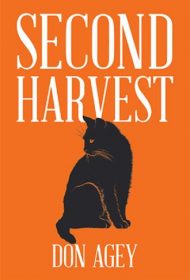 Don Agey’s Second Harvest is comprised of mostly rhyming poems that ruminate on the speaker’s life, including his past relationships, religious and political worldview, and the challenges of his writing process.

Each poem is presented on the recto page of the collection and preceded by an explanatory prose passage on the verso page. Some are appended by haiku and limericks.

The pieces range in tone from whimsical (“Party On Dude”) to somber (“Kerri,” an homage to his late wife). The haiku and limericks that follow mostly seem unrelated to the accompanying poem. For example, “No Reason Really” recounts the speaker’s desire to write a “sublime” poem, only to fall far short, while the haiku that follows takes readers another way: “Soft warm sun beaming/ Kaleidoscope of color/ Asthma kicking in.” Readers will appreciate the wry tone of each, but one wonders why they are placed together.

The work, often humorous, is generally expository, “telling” rather than “showing,” recounting, rather than exploring. For example, “Looking Back” begins: “Sitting here alone, except/ for my two cats, I ponder/ seventy some years./ Some years flying by, some/ years crawling at a/ snail’s pace.” The ideas expressed are broad and general, employing clichéd language like “years flying by” and “crawling at a snail’s pace” instead of fresh imagery—a pattern that persists throughout the collection.

Second Harvest, offers some fun word play (“In that small hush when night and day/ Juxtapose/ Listen and you might hear some stray/ Epic prose”). But overall, it lacks artful diction and emotional nuance. The rhyming is uneven: sometimes spot on; other times straining. In most cases, more specific, sensory, and contextualizing details would improve the work.

In all, the collection offers a mixed bag. It is most likely to entertain those looking for amusement rather than keen insight or impressive poetic achievements.