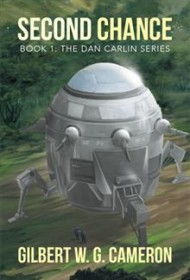 Camping with friend and fellow astronaut Luke, Dan encounters a crashed extraterrestrial spaceship. Immediately, they see a unique opportunity. Rather than notify the authorities about the ship, they decide to use it to change the course of human history by eradicating bigotry and factionalism.

Fortunately, the ship provides nearly unlimited resources, which they use to build a home base in Australia and recruit an army. Then they use their superior technology to force the various governments of Earth to either disarm or risk nuclear disaster at the hands of their own weapons (with devastating consequences). Afterward they empower the United Nations to govern and become the world’s police.

Dan’s revolution results in considerable casualties and long-lasting damage to the planet. In fact, Dan could as easily be viewed as a dictator instead of the hero. His solution for the world’s ills is like the parent that demands his children stop hitting each other or else he will hit them harder; it seems destined to create greater damage than it’s meant to avoid. But Second Chance misses that irony. And when Dan takes to space to intervene in an alien conflict, it is the same political naiveté that makes him seem more a neo-colonialist than a liberator.

Second Chance has abundant typos and its characters are underdeveloped. We have no background on the protagonists that explains their actions (no mention of family, relationships, formative experiences, etc.). Dan’s choices particularly lack credibility. His mission is simultaneously too outlandish and too simplistic to be taken seriously, and in the face of that, even the most explosive space battles can’t manage to give Second Chance the propulsion it richly needs.