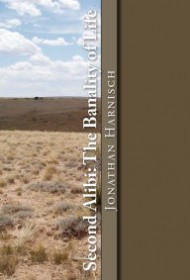 Afflicted with schizophrenia, Tourette’s Syndrome and other mental illnesses, the prolific and gifted Jonathan Harnisch has transformed the harrowing raw material of his life into what he calls “transgressive fiction” in semi-autobiographical novels such as Jonathan Harnisch: An Alibiography and Living Colorful Beauty. With Second Alibi: The Banality of Life, he revisits the abrasive, triangular psychodrama of his brilliant, questing psychotic Ben Schreiber, Ben’s libertine alter-ego, Georgie Gust, and the sadistic temptress, Claudia Nesbitt, who torments them both, while also including a moving plea for understanding that stands apart from the disturbed fevers of his fiction.

“This is a story, I hope, about my coming to enlightenment,” Harnisch writes, and in that vein he enlightens us, too, about the fantastic terrors of schizophrenia: “What this life is like with the ups and the downs, the confusion, the love and the hate; the black and the white.” He tells us about his moods abruptly shifting 25 times in an hour, his suicide attempts and addictions, the grim realities of sleep deprivation and the fear that his beloved wife has been reading his mind.

Second Alibi toggles unpredictably between semi-coherent rage (Harnisch says he often writes when symptomatic) and cool detachment, and it deploys several forms: Harnisch’s sexually-charged fiction (Claudia is “a slow-moving serpent with a tongue of fire and the ass of a bombshell”); a 106-page screenplay featuring dialogues between Ben and his old antagonists, and with his life-saving therapist, “Dr. C”; self-lacerating entries from “Georgie Gust’s” 2005 diary, and the author’s clear explanations of his condition, apparently written at moments when his symptoms have subsided.

At times, Harnisch is energized by the very power of his illness. “The mind and the sickness is all so sublime,” he writes, “the heart of living, colorful beauty.” But in his most lucid moments, this brave and eloquent writer struggles mightily to escape the dark woods of madness: “As always, my journey continues, on and on.”