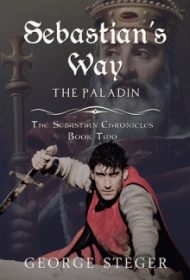 Franco-Saxon history spans the timeframe of the early 9th century covering the exploits of Charlemagne (Charles the Great) and his paladins, or warriors. Author George Steger fully dives into this era and devises a multi-volume tale of Sebastian, fictional paladin of Charlemagne, and Sebastian’s trials and triumphs both as soldier and family man.

In this story, Steger picks up where he left off in volume one (The Pathfinder). Sebastian discovers that the brutal first husband of his beloved wife Adela is not dead as suspected. Although Konrad doesn’t return to claim his wife, Adela still feels she cannot continue her marriage to him and locks herself away in a convent.

Sebastian embarks on a quest to eliminate Konrad, which contradicts his own moral compass and also distracts him from the tasks that his sworn liege, Charlemagne, sets forth for him. Most of the story follows Sebastian on his soldierly duties while the torment of his lost family haunts him and makes him lose sight of the purpose of knightly battle versus pure ruthlessness. When Charlemagne sends him to the Middle East, characters along that journey, including the enigmatic healer Magdala, and his tranquil son Milo, help him swivel back to his moral path.

Steger has obviously done his research, and the historical points he recounts are verifiable while the fictions that he weaves to fashion a palatable story are seamlessly incorporated. Some readers may tire of an overabundance of information and introduction of characters, but Steger assists by including a handy list of characters for reference.

This will be a gratifying read for medieval history buffs, but even those unfamiliar with the era can relish the tale of Sebastian and his adventures throughout what is present-day Europe to Jerusalem, Baghdad, Constantinople and back. Though this is the second in a series, readers won’t miss the plot thread by jumping in at this point, and will await the next volume.