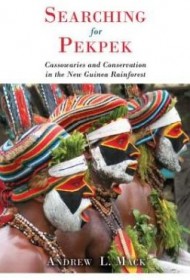 Don’t let the unusual title turn you away from this engrossing story of a scientist’s years in the far reaches of the Papua New Guinea rainforest. The impetus for Andrew L. Mack’s adventure—studying cassowary droppings and the seeds contained therein—may not seem very glamorous. But Mack discovered much more in the jungle than bird scat. He found connections: between the plants, animals, and people living in this remote and undeveloped part of the world.

Mack is a natural storyteller, and he peppers his hair-raising jungle adventures with a good dose of self-deprecating humor. For instance, he’s equally in awe of the indigenous Pawai’ia men’s ability to spontaneously create a bridge with two trees and some raffia and embarrassed about his own reluctance to cross the chasm on such a contraption. Nothing holds him back for long, however, and soon there’s a research station, a helipad, and plenty of data to be recorded.

Stories about Mack’s captive cassowary chicks, Huey and Louie, will have readers giggling at the truly “bird-brained” pair, while tales of his interactions with conservation groups and oil companies will frustrate his audience in the extreme. Meanwhile, Mack gets to know the village politics, the forest’s growth patterns, and a way of life that might not be around much longer.

His struggle to bring the area’s riches to light while simultaneously protecting its delicate ecosystem is heart wrenching. Getting this book into as many hands as possible is one way Mack hopes to bring awareness to the need to protect the remaining rainforests. Searching for Pekpek’s utterly compelling stories make this unknown region feel real — and that just may be the key to keeping it that way.