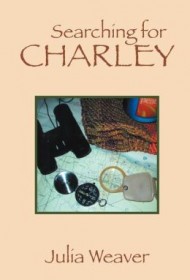 Romance novels are often the empty calories of the literary world: tasty guilty pleasures that aren’t really filling. Yet once in a while, one comes along that transcends the generic mold. With tightly plotted action and spare yet sophisticated writing, author Julia Weaver delivers that exception with Searching for Charley.

Delivering writing that feels almost like a spy thriller, Weaver spins the tale of Jessie Mitchell’s growing realization that danger lurks as she sets off to find Charley, the missing grandson of the elderly woman who had raised her and recently died under mysterious circumstances; the family lawyer will not read the will until Charley is present. As Jessie searches for Charley, uncertain if he is part of the growing treachery around her, old feelings she has for him begin to surface.

Weaver’s foreshadowing hits just the right tone of building tension without revealing too much. The many characters – not all are as they seem – are used well to further the action and drop clues. And the Los Angeles police detective who has a hunch something is amiss is especially effective in filling in the background of the tangled family tree without feeling like expository.

It is the writing in Searching for Charley that really shines. Readers realize right alongside Jessie just how much danger she is in: In one chilling moment, Jessie discovers she is being shot at with a silencer as the leaves around her head began to shatter. The book never lingers too long on one scene, instead weaving together many seemingly disparate elements that ultimately make sense.

The tale includes a few weaknesses: The crime at the story’s heart isn’t well explained, and the resolution feels rushed. But here, the journey is indeed the thing. Charley’s role remains unknown until the end – which is how it should be. This is a strong addition to a crowded genre, captivating enough to appeal to a wider range of readers, as well.