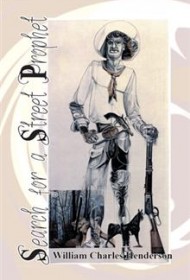 He was warned: “Artists starve…and little black boys like you will starve twice.” But William Charles Henderson did not starve; he became an artist, and with his talent, navigated a complex journey to real places and inner spaces.

An autobiography with echoes of coming-of-age and stream-of-consciousness genres and a smattering of the picaresque, The Search for a Street Prophet is the colorful saga of an artist’s quest for life’s meaning and purpose. When Henderson was a child, various teachers encouraged the raw artistic ability that became his ticket out of the limiting circumstances of America’s Deep South. He studied with renowned artist/teacher Haywood Oubre. In Haiti, the setting of much of the book, Henderson pursued his artistic work, while seeking the company of boisterous male companions and  adoring an alluring female.

Told in roughly sequential episodes from Henderson’s youth and early manhood, the memoir is more thematic than plotted, major leitmotifs being art, religion, and race. Referencing such diverse icons as William Blake, Aristotle, and Jesus, the author interweaves into his personal odyssey the heroic and blighted history of Haiti and a vivid portrait of Toussaint L’Ouverture.

Although rich in accent, history and folklore, this book is nonetheless disconcerting. Henderson offers the barest framework for his story, letting ideas and notions blow through in a whimsical, sporadic manner that is more often confusing than charming. Precedents exist for this hodge-podge style (Kerouac comes to mind) but, combined with misspellings that sometimes stymie comprehension (“though” for “thought”), the result is frequently disappointing. We would like to understand better the man at the heart of this book, but each time he promises to bring himself into closer focus, he distracts us with another non sequitur: a disparate personal memory, a slice of lofty philosophy, a disconnected piece of history.

The end of the book offers the most clarity: A few pages of Henderson’s sketches demonstrate not only feeling and fascination, but a sense of orderliness that is missing in his prose.