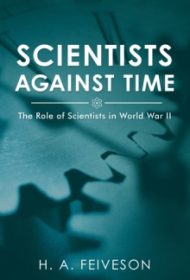 In his inspiring book Scientists Against Time, historian H.A. Feiveson examines the scientific discoveries and contributions made to the war effort during WWII, skillfully explaining how they facilitated the Allied victory.

Feiveson developed the book from a seminar he has taught at Princeton University and has honed his presentation to an art form. His mixture of history and science is offered in an accessible style; readers will feel as if they are sitting in the classroom of their favorite professor.

While it would take volumes to cover the entire war effort and delve into every scientific discovery, Feiveson strikes the perfect balance of hitting the highlights and providing a robust bibliography for those hoping to probe deeper.

Topics covered include scientific contributions to landmark turning points in the War. In the European Theater, the key to The Battle of Britain was the invention of radar and the design of the thin, yet strong Spitfire airplane. Feiveson traces the cracking of the seemingly unbreakable Enigma code from initial efforts to the eventual “a-ha” moment at England’s Bletchley Park. Breaking this code led to eventual defeat of the U-boat threats in the Atlantic and aided the Allies in generating massive deceptions, such as a fictitious army and fake code transmissions, in order to triumph on D-Day. In the Pacific Theater, the author notes that no contribution rivals the ability to split the atom and create a nuclear bomb.

Science and math greats are represented, including Neils Bohr, Robert Oppenheimer and Alan Turing, as are lesser-known figures.

While these topics might seem heady, Feiveson parses them into digestible chunks, creating a straightforward read. He also includes a graphical chart of the war’s timeline in both the Pacific and European theaters and an ample index and reliable footnote/endnote section.

Those who require every jot of information (e.g., in a multivolume work) may want to look elsewhere, but anyone seeking a hard-working overview or introduction to the topic will find this a superb offering.

BlueInk Heads-Up: Librarians may wish to stock a copy or two of this book because of its accessible style as well the comprehensive bibliography allowing readers effortlessly to take a next step in research.