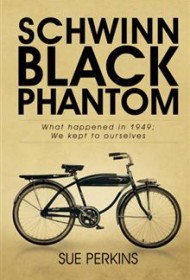 Sue Perkins’ Schwinn Black Phantom is an entertaining, if meandering and at times confusing, novel of friendship, comedy and adventure. Perkins has crafted a memorable protagonist in Warren Hearst, a feisty, unapologetic man who looks at his life with both absurdity and compassion — a mix that readers will find surprisingly compelling.

The narrative alternates between the present action of a 60-something Warren and his childhood friend Whitey, as they plan what may be their last hurrah/prank/robbery, and a young Warren recovering from polio in 1949. In this past time frame, Warren first meets Whitey and adjusts to life in a new town and social environment.

Perkins has an ear for dialogue, although the Omaha parlance of the era might strike the reader as a bit over-the-top. Nevertheless, Perkins’ vivid details wonderfully develop the characters, as this example illustrates: “He’s wired tighter than a squirrel in heat and chewing gum so fast, I worry he might bite his tongue and scream…”

Perkins is less successful in steering the reader through a clear, uncluttered story arc. She includes specific, compelling information about many of the characters, taking pains to elaborate on a back story or past adventure that brought Whitey and Warren closer together in unexpected ways. The problem is in interpretation: the reader doesn’t know how to weigh these incidents and pieces of information or meaningfully connect them to the present-tense narrative.

Schwinn Black Phantom is both an engaging and frustrating read. If readers approach the novel as a character study, they will be far more satisfied with the novel than if they view it as a more complete narrative with all the elements of contemporary fiction, including a clear, well-developed plotline.