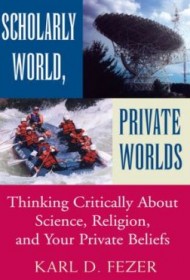 Informal logic is a discipline that examines the validity of the arguments we encounter in everyday discourse, from political speeches, to editorials, to posts on social media. Karl D. Fezer’s work is nothing less than a tour de force of informal logic.

This important book investigates under what conditions our beliefs are warranted and the limits of the methods by which we derive them. The author is not concerned with validating or debunking any particular worldview, religious or scientific, but with examining the grounds on which we form the views that we do, in fact, hold.

The book’s first part discusses the distinction between the views we harbor in our inmost hearts and their extension into the social realm, where we encounter a multiplicity of views different from our own. In the second part, Fezer presents good reasons why we might doubt the beliefs we hold. In his third section, he discusses methods by which we might form views that are worthy of being called rational. The final section covers the differences between science and religion and the limitations inherent in attempts to reconcile competing worldviews.

Fezer also contributes to the debate around teaching Creationism in schools. He makes an argument for limiting the curriculum to accounts of the natural world that do not introduce supernatural principles. However, Fezer is not anti-religion, and he discusses both religious and humanistic viewpoints neutrally.

The author notes that he is attempting to fill a void in university liberal arts curricula. As such, the book has the structure of a textbook, complete with questions for further study in an appendix. However, it is written in crisp, readable prose. Readers who aren’t intimidated by the textbook style will find a cogent, forceful presentation that is likely to challenge his or her convictions in a non-threatening and highly impressive manner.

Author Platform: Author Karl D. Fezer notes that an Interdisciplinary Incentive award from the National Science Foundation and the National Endowment for the Humanities aided his work on the book. This support allowed the author to take a sabbatical from Concord College in West Virginia and serve as a Visiting Scholar at Harvard University. A college course based on this text won the Templeton Foundation Science and Religion Course Award in 1997.