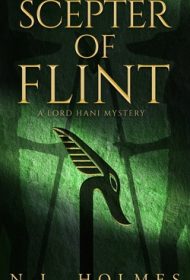 Set in pharaonic Egypt around 1353 BCE during the tumultuous reign of Akhenaten and featuring career diplomat Lord Hani, the third installment of Holmes’ stellar historical mystery saga finds the royal investigator entangled in a myriad of dangerous predicaments, not the least of which is a plague spreading throughout the New Kingdom.

The story begins with the opening ceremony of the Great Jubilee of the Aten, a weeks-long festival to pay homage to Akhenaten. During the festivities, with countless foreign ambassadors flooding the capital city and its surrounding areas, Hani is tasked with a dangerous mission: to identify and arrest the perpetrators of a series of tomb robberies. Witnesses have identified some of the men involved as foreigners, which complicates the investigation exponentially since relations with surrounding nations are unstable at best.

This is close to a flawless novel. The characters are all fully and insightfully developed; the storyline is impressively tapestried; the author excels at imagery and symbolism, layering a subtle yet powerful avian motif throughout.

But it’s the immersive nature of the narrative that makes this novel so hard to put down. The description is meticulous, down to the smallest detail: “…the servant handed around the bowl of dates wrapped in fat smoked pork, swimming in a tangy pomegranate-juice sauce.” Additionally, the author excels at sensory description, using these kinds of descriptors to make the world come alive: “The call of frogs pulsed. Not far away, a heron cried hoarsely, and from across the River, a roar proclaimed the presence of a hippopotamus.”

Simply put, this series is outstanding—a saga that will satisfy mystery and historical fiction fans alike.