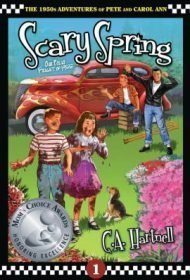 In C.A. Hartnell’s first book of a middle-grade series set in the 1950s, 11-year-old Carol Ann is terrified of catching the deadly polio virus—and of getting shots.

Carol Ann is familiar with the terrible effects of polio: Some of her family members are polio survivors, as is a teenage boy she knows, and her new neighbor, Mr. Chester, is also crippled from the disease. Talk of the dreaded disease is everywhere, and Carol Ann grows increasingly afraid of catching it. She also fears shots, but her friend Pete reassures her they “are just a little pinch.” Later in the story, Carol Ann learns that her Aunt Ruthie is on a research team helping Jonas Salk develop a polio vaccine.

Meanwhile, Carol Ann also fears for Mr. Chester’s beagle puppy, who has begun routinely escaping from his yard into hers. She has good reason to be frightened: In one horrifying scene, after Mr. Chester sees she and Pete spying on him, he picks up one of his chickens and chops off its head, spraying the two kids with blood.

As the story progresses, Carol Ann falls ill, exhibiting some symptoms of polio, and Mr. Chester leaves a get-well card and surprise gift for the convalescing girl.

The story has a Christian slant (for example, both Pete and Carol Ann pray that if she needs a shot, God will grant her the courage to face it; when it turns out Carol Ann doesn’t have polio but endures a shot for strep throat and tonsillitis, she’s happy that “God answered”). There is good kid-humor here, memorable characters—particularly the likable Carol Ann and spunky Pete—and some nice descriptions: “Up and down, up and down, the head of scraggly hair seesawed with each crippled step.”

Unfortunately, these strengths are overshadowed by an unfocused plot. Much of the story is a series of unrelated scenes that include exhaustive details. The author laboriously discusses Pete and Carol Ann being harassed at a diner, the family’s shopping spree, menus from the school cafeteria, and Easter dinner. Such diversions dilute the polio plot’s natural tension. In addition, what should have been a perfect ending—Mr. Chester’s gesture toward Carol Ann—is undermined by his former cruelty; as a result, it will be difficult for readers to embrace him.

The book features delightful illustrations that evoke the era. The author also includes some related elements at the end: photographs of the real Carol Ann and her family, and one of Dr. Jonas Salk; a list of resources about polio and vaccines; a recipe for chocolate chip cookies; a glossary of ‘50s slang (“FLICK: a movie”) and a cost list of ‘50s items (one-dozen eggs cost $.45). Some of these will interest young readers more than others.

In all, this is a nicely produced book with an interesting topic and engaging characters, but the meandering plot proves frustrating. A more focused approach would greatly improve this offering.