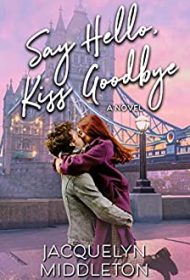 As steamy as it is heart-warming, Say Hello, Kiss Goodbye—Jacquelyn Middleton’s fourth novel after 2018’s Until the Last Star Fades—is a globe-hopping contemporary romance that revolves around two lovers who struggle to put their time together behind them and move on with their personal lives and professional careers.

Leia Scott—an upcycle fashion designer from New York—is in London visiting her sister and trying to get her life in order after a messy divorce. She has sworn off serious relationships, but when she meets wealthy real estate developer Tarquin Balfour in an IKEA on New Year’s Eve, she’s taken by the man’s kindness and charm. His dashing good looks don’t hurt either. They end up spending time with each other before Leia leaves for the States—but although both are struggling to move past failed relationships, each one can’t forget about those fleeting moments together.

While contemporary romances are rarely almost 500 pages long, the novel doesn’t suffer from narrative bloat. Middleton keeps the story focused and moving at a brisk pace, and it reads like a much shorter work.

The sex sequences are nicely complemented by the quirkiness of the characters’ relationship, particularly Tarquin’s nerdy side. Obsessed with Stars Wars (he owns a Darth Vader rubber ducky and a life-size white fiberglass Stormtrooper) and a fan of Dr. Seuss, as evidenced by a well-worn Horton Hears a Who T-shirt, Tarquin is a great example of a how a leading man in a romance can be completely open and honest with his own idiosyncrasies while also appealing and irresistibly sexy.

The two main characters are deeply described and undeniably endearing; Leia’s fully self-empowered little sister (who is wheelchair-bound after a childhood accident) is described with insight; mental health issues are explored with the appropriate gravitas, and the theme of gratitude is strong throughout.

In sum, romance fans will be grateful they picked up this novel. With Say Hello, Kiss Goodbye, Middleton has written a winner.