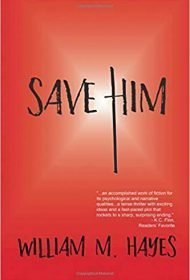 William M. Hayes’s Save Him combines the physics of chaos theory and the whiz-bang action of a technothriller to fuel a military page-turner that tests the faith of everyone involved.

The novel centers on an elite military squad called “The Unit,” based at a secretive laboratory where scientist Rydel Scott outfits soldiers with futuristic technology. It’s one of these technologically advanced devices that enables the main plot.

Through a device gone awry, Rydel accidentally discovers time travel. He soon learns, however, that changing the past can have dire consequences for the present: An early time travel experiment has inadvertently caused a deadly tsunami.

Meanwhile, Rydel’s sister, a member of a convent, has learned of this time travel possibility. In a moving scene, she appears to Rydel on her death bed as if miraculously cured and implores him to travel back 2,000 years to save Jesus Christ. She sees a war coming “that will turn the earth into a literal hell.” Christ must be saved, she says, to spare humanity this war. Rydel agrees to her wishes, despite the dangers.

From here, the story resembles Crichton’s time travel adventure Timeline as The Unit pursues Rydel in Jerusalem. A falling out between the Unit’s commanding officers adds dramatic tension while a shadowy adversary called “The Other” delivers palpable danger. Although the novel isn’t overtly religious, Bible readers will recognize historical figures, including the Savior’s mother Mary, the resurrected Lazarus, and Christ himself.

The novel requires some suspension of disbelief, and its reliance on its deus-ex-machina technology is rather convenient. Nevertheless, this is one of those rare thrillers that delivers authentic emotional weight along with its action-packed set pieces. The major characters are well written, and the story provokes thought about how disruptive powerful technology might be — especially in the hands of someone who firmly believes in their rightness, no matter the cost.

In short, Hayes delivers a tense, propulsive novel—one seeded with messages about faith, hope and sacrifice.