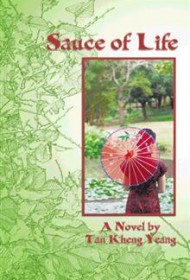 This fourth novel by Tan Kheng Yeang, who is now about 100 years old, was first published in 1974. Its re-emergence this year reveals a writer with a deep respect for tradition (Tan is a Chinese-Malayan who writes in hyper-formal English) and a gift for high drama expressed in muted tones. Stylistically, he employs details so precise and fastidious – the scent of chrysanthemum tea, the demons and scorpions that haunt a sick man’s delirium – that his method suggests the time-honored gongbi (“meticulous”) technique in Chinese painting.

Set in the 1930s in a small Malayan town called Lanta, Sauce of Life focuses on Lee Lai Pek, a self-satisfied shopkeeper and family patriarch whose life starts to unravel at age 45. A clever rival merchant threatens his prosperity; a tiger kills a worker at Lee’s modest rubber plantation; worst of all, forest bandits kidnap his first-born son and the young man’s lovely fiancee. Once smug in his success and contemptuous of change (he’s a kind of Asian Babbitt), Lee now despairs, falls ill and must open his heart to new experience if he hopes to survive. Ironically, it is his detested business competitor, the serene Sin Beng Hu, who gives him the best advice: “Struggle is itself a bliss.”

Just so. The novelist’s hard-won happy ending blooms like a lotus flower around the Lee family.

Western readers might be put off by Tan’s verbal formalism. One character is said to be “not deficient in the quality of being agreeable”; a soothsayer predicts that a young woman “will suffer an unpleasant calamity.” But Sauce of Life’s quiet flow and its contemplative gaze at the foibles of human action satisfy in ways that boisterous, showy fiction cannot. This is a polished Oriental gem