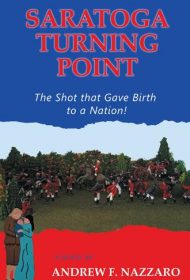 Saratoga Turning Point is a historical novel set during the American Revolution. It follows the battle of Saratoga and the death of British General Simon Fraser, which resulted in England’s defeat there and eventually to America winning the war.

The story switches between large-scale events and historical figures and the character Philip Eames, a New York hunter who attempts to avoid becoming involved in either side. As author Andrew F. Nazzaro writes in his Epilogue, there’s debate over whether the colonial soldier credited with shooting Fraser was actually responsible. Nazzaro, thus, takes artistic license, inserting another character who commits the deed.

The novel has an authentic feel, with interesting details about traveling on wintry rural roads, tracking animals for food, and more. Many descriptions of military maneuvers, by both American and British forces, are included.

In addition, historical figures like Benjamin Franklin and Benedict Arnold make appearances. Arnold, in particular, is depicted as a sympathetic character, a smart battlefield tactician who fights on the front lines with his troops, while also having a short temper and impatience with playing the political game.

The novel has some difficulties, however. The summaries of events leading to the Revolution, such as the Boston Tea Party, often feel as if taken from a history textbook. While the parallel stories of the Revolution and Eames is ambitious, it feels strange that they never really intersect until near the end. Then Eames’s participation feels rushed and surprising, with little set-up.

Additionally, the dialogue often feels clunky, including this exaggerated passage from a character described as speaking “stilted English”: “‘General Schuyler asked me to be a’lookin’ out for you…He sure was a’happy and smilin’ real big when he was a-tellin’ me about you a-comin.’ Come this-away.’” Also, much of the humor is spoiled through explanations, and misspellings (i.e., “idol” for “idle”) require correction.

Some revision would enhance this story. Still, readers interested in the American Revolution will find some rewards here.