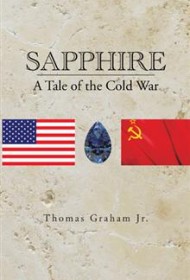 In this Cold War thriller, the United States and the Soviet Union play metaphorical chess in the years between 1954 and 1961.

Linda Blaine a.k.a. Sapphire, becomes a CIA agent after college, following in the clandestine shoes of her father. She soon becomes a valuable asset, able to speak foreign languages fluently, slip in and out of dangerous situations, and retrieve much-needed information. But, as time goes on, she longs for a more “normal” life and pines for Joe Barthelmy, a man she loved and lost.

They re-connect and marry, and he willingly becomes an important part of her “team.” His best friend, Alex, soon becomes a third player in the games (in fact, it is Alex who is telling the story of Sapphire). When Linda has children, she has to choose between her comfortable life in San Francisco or returning to the field for one more mission.

The book is historically accurate, despite the fictional main characters, and will introduce readers to some of the little known intrigue in Hungary, Jordan, and Iran at a time when the U.S. and Russia were plotting moves and counter-moves. As with most fictional spy stories, however, readers have to suspend disbelief at the James Bondish touches. Our heroine makes narrow escapes and shoots the bad guys, all with her loving husband in tow.

The story moves smoothly, but the dialogue is often stiff and awkward.  When they recruit Alex and offer to take him skiing for a couple days to think it over, he says, “I would prefer to stay here and simply think about all this for a while and hopefully be more prepared emotionally when you return.”

The author, retired Ambassador Thomas Graham Jr., was a senior U.S. diplomat in U.S. negotiations after the Cold War, but he clearly knows the territory. Despite its flaws, the story is intriguing and should send readers to the Internet, hungry to know more.