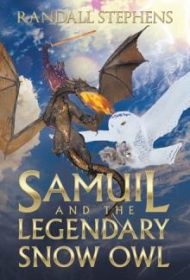 Randall Stephens fuses an unlikely duo of literary genres in Samuil and the Legendary Snow Owl, the first entry in a planned trilogy.

With plenty of epic battles, a varied cast of otherworldly creatures and a central narrative pitting the forces of good against evil, Stephens’ novel can safely be categorized as a fantasy. However, it also boasts a dynamic reminiscent of Dostoyevsky or Chekov, offering an eye for in-depth psychological character development and intense interpersonal drama straight out of a Russian novel.

Indeed, the story takes place in 19th-century Russia, during an imagined war between human soldiers and an army of darkness. As Stephens examines the vagaries of the fictional Allied Shadow War, he introduces a young P’etro Fedorchak, who fights alongside fellow members of the “Brotherhood,” soldiers who face the enemy armed with 1840s guns and swords, even as they ride a winged Pegasus over the battlefield. Fedorchak survives harrowing battles, weds a princess and moves to a picturesque cabin near the shores of the Black Sea, where his son Samuil is born.

The threat from the forces of evil doesn’t stop with the end of Fedorchak’s battlefield service, however. His wife and new son are targets of malevolent monsters bent on destruction. As Samuil grows up, the son must do battle against an evil first encountered by his father.

The author offers a unique hybrid of real-world environments and historical elements, while simultaneously spinning a tale full of imaginative creatures and mythical conflicts. Unfortunately, although Stephens creates a book full of compelling characters, what they’re fighting against is sometimes vague and unclear, as he never spells out a distinct history or background for the Allied Shadow War. Readers must puzzle out the context for themselves, which proves challenging amidst all the character development and detail.

Even so, Stephens offers plenty of clear and concise action, and his skill for creating strong characters makes the first entry in the series engaging and memorable.