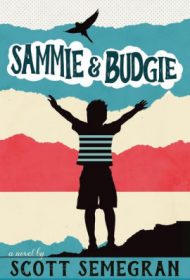 In the amusing and at times mystical third book of Scott Semegran’s Simon Adventures series, single parent Simon Burchwood is back, this time with a story centering on his 6-year-old son, Sammie.

After Sammie spectacularly predicts an accident early in the novel, Simon realizes his son has a special ability that allows him to see into the future. The novel traces Simon’s journey of discovering his son’s ability and his attempts to have that ability recognized.

Readers also get to know his daughter Jessie, their nanny Nat, and Simon’s challenging past (including a cheating wife who was killed with her lover in a car crash).

When Simon learns his father is ailing, the four of them take a short road trip to visit him, and along the way, they meet the parakeet in the title, whom Sammie begs for.

The story is narrated by Simon, and admittedly his “voice”—meandering and expletive-filled—isn’t for everyone. That said, the novel’s delights abound. They include endearing illustrations: cartoons drawn by “Sammie” and realistic portrayals of objects Sammie finds. Even more compelling is Simon’s storytelling, which deftly pulls readers into his idiosyncratic world.

Simon directly addresses readers, and his narration is filled with delicious descriptions of life’s minutia: “I thought it weird that one of my prized possessions, which hid in the garage from my failed marriage and made it out the other side of a hectic move to a new home, was a rusty coffee can full of stinky, cigarette butts and ashes…What did it mean that something most people would consider a piece of trash held so much significance to me?” Semegran is a gifted writer, with a wry sense of humor.

Poignant, yet never maudlin, this novel will appeal to literary-minded readers and fans of magical realism. Although the Simon Adventures trilogy is already out, the ending suggests we’ll see more of Simon, Sammie and even the parakeet. That’s a happy possibility indeed.