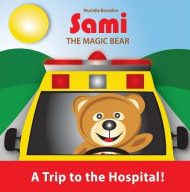 The premise of the series is that Sami, a magic bear, comes to life to offer help and advice to young children in need of it. The first two books tackled bullying and grieving. A Trip to the Hospital! follows with the stand-alone story of Laurie, an energetic seven-year-old who’s suddenly getting tired easily. Her parents take her to a doctor who performs all kinds of blood tests, and the result is alarming: ” ‘It’s leukemia, a blood cancer that can be fatal,’ Dr. Scott says. ‘Our blood is made up of red and white cells. When there are too many white cells in the blood, our body doesn’t react well and can no longer fight infections. That’s what’s happening to Laurie right now.’”

It’s a simple, unvarnished explanation, and the succeeding pages tell of Laurie’s exhausting treatments. During the process, Laurie receives a gift from her teacher and classmates: Sami, a stuffed bear who soon reveals that he’s able to talk, offering Laurie encouragement when she needs it most. Laurie eventually recovers, and Sami maintains a special place in her heart.

Bourdon handles a complex subject professionally and gracefully, although some could consider the title a bit misleading; Laurie’s is an extended stay at the hospital, not a more common trip to the emergency room for a broken arm or leg. Additionally, there are a few confusing moments, such as when we’re told that Laurie’s treatment lasts two weeks, but later Laurie complains that she’s been in the hospital two months.

While the illustrations are simple and repetitive, the minimalist style works here, keeping everything neat, clean, and colorful. Any child facing an illness might appreciate Sami the Magic Bear: A Trip to the Hospital!, but particularly any child struck by leukemia.