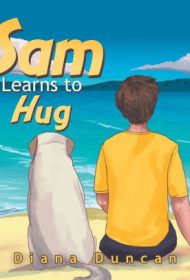 Sam, a boy who avoids physical affection, gains comfort from a dog with an abused past.

As this rhyming picture book begins, Sam (age unclear in the text, but illustrations depict him as a young adolescent) doesn’t like to hug anyone but his mother and occasionally his father. This causes consternation in his family. His grandmother suggests getting a dog (“Dogs are so easy; they don’t make a fuss/ And know better than us how to cuddle”), and his parents decide to try it.

The next day, Mum and Dad bring home Monty. Sam learns that Monty is a rescue dog from a home where he went unfed and alone much of the time, and can be skittish as a result. Sam’s mother suggests he get used to physical touch by “practic[ing] on Monty each day.” Soon, Sam is triumphant. “’You’ll all be happy with me,’/ Sammy told Mum that night/ As Monty snored quietly on his rug./ ‘We practiced all day, and/ it’s not that hard./ Monty and I are the best. We can hug!”

Sam’s struggle is compelling and will be helpful to some families with children who shy from affectionate touch. That said, the narrative enforces the idea that a child who prefers not to touch can and should become comfortable with it, but doesn’t engage with the legitimate reasons they may shy away from touch in the first place. Adults must evaluate how to present and nuance such a lesson before adding this book to a child’s collection.

The story is competently illustrated—the images of Monty are particularly expressive—and the pictures support the text without stealing the show. However, the narrative’s meter often changes between lines and stanzas, making the reading clumsy at times.

That issue aside, Sam is a sympathetic character, and his story will resonate with young readers pressured by their families to fit in, although parents should consider building a larger conversation around the topic.