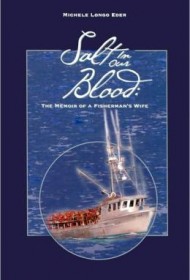 While fishermen bear the physical risks of their sea-going profession, their family members carry the emotional burdens. So it was for Eder, who started a journal in December 2000 to chronicle the life of her commercial fishing family in Newport, Oregon. Eder’s husband Bob operated two fishing boats. Her sons Ben and Dylan pitched in whenever they were home from college. The author, an attorney, remained on shore, detailing her constant worries in her writings.

As it turns out, she had reason for concern. A year later, the worst imaginable happened: one of their boats capsized in near-freezing waters while the crew was setting crab gear, killing 21-year-old Ben and three others. Eder continued recording the situation in her journal, adding Coast Guard reports and recollections of others involved with the events of that tragic day, as well as her difficulty dealing with insurance company investigators and lawyers while grieving.

Eder’s journal entries show writing flair (for example, she describes the anxious state of fishermen just before the season begins as being “like thoroughbred racehorses in the starting gate.”). She also adds interesting details and sidelights, such as recipes for the elaborate meals she regularly prepared and froze for the crew (chicken enchiladas, chicken Malibu, pot stickers, goulash etc.) and her financial bookwork (180,000 pounds of fish sold at $1.75/lb. grosses $300,000). Readers with or without knowledge of the fishing industry will find this story, enhanced by color photos of the family, an engrossing and moving page-turner.