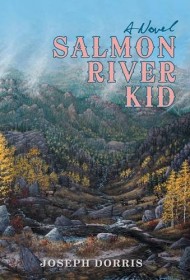 This adventure novel — the third in a series — continues the story of a young boy facing all the challenges of trying to strike it rich in the Idaho Territory in 1872.

Fifteen-year-old Samuel Chambers and his father Charles originally joined the gold rush hoping to make enough money to return to their struggling farm in Iowa. But each season has brought its own daunting challenges from man and nature, and their dreams are dashed when their small cache of gold is stolen during the brutal winter. Still Samuel feels drawn to the strangely beautiful land. As he transitions from boy to man, even falling in love with a young girl on a nearby ranch, he begins to weigh his dream of chasing gold against his longing to see his mother again.

This well-written story offers a rich, authentic portrayal of the Old West. (Forget the Pony Express; the postman delivers the mail on snowshoes.) The author, who spent his youth exploring the Idaho backcountry and who has done extensive research, captures the uneasy relationship between the settlers and the Idaho Sheepeater Indians and the blatant prejudice against the Chinese. He also details the chemistry behind cleaving gold from its source as Samuel learns the process. But there are plenty of light-hearted moments as well. When an injured Samuel struggles to take a bath at the boardinghouse, he has to allow Ma Reynolds, the proprietor, to lather his hair: “ ‘Now, I won’t notice anything,’ she said. Samuel grimaced. Of course she would. There was hardly enough water to cover his toes.”

Adults will enjoy the book, but the series is especially attuned to teens, combining science, history, and teenage angst in a relatable way. Readers will not only appreciate the escapades of Samuel in this immensely entertaining novel but they’ll have new respect for the hardy souls who were determined to survive in a harsh land despite all odds.

BlueInk Heads-Up: This book would make an excellent addition to any school curriculum focusing on the history of the West.