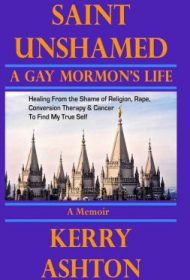 This powerful, extensively detailed memoir tells the life story of Kerry Ashton, who grew up gay and Mormon in a small Idaho town.

An actor and playwright, Ashton dramatically tells his tale, first detailing his abusive childhood and struggles at college and later discussing his efforts to become a famous actor while learning to overcome his childhood shame.

Ashton’s parents argued constantly. His mother, he writes, was “the only source of love I knew,” while his father was frequently enraged at his youngest child’s “sissy” behavior, such as when he performed the Cowardly Lion’s song from The Wizard of Oz or cried during his parents’ shouting matches.

At Brigham Young University, Ashton discovers sex in a restroom and deals with a crush on his friend Harlan, who slowly reveals his own troubled past. It’s fascinating to watch this friendship—and the handsome former Marine’s complex feelings towards Ashton—unfold.

Ashton is viciously raped during a hookup, and under threat of expulsion when university authorities learn of his cruising, undergoes electroshock therapy to “correct” his sexuality. (The Mormon church believes gay members can be changed and threatens excommunication for any who refuse treatment.) The procedure leaves his hands “constantly shaking.”

Eventually, the author, with the help of his therapist and loving partner, works through the past trauma and begins to reconcile with his family.

Ashton is a passionate, unfailingly candid narrator. Using vivid detail, he crafts absorbing scenes. Sometimes, however, this drama can seem overblown—such as his breathless recounting of the time he fielded a phone call from his idol Barbra Streisand while working for a prominent agent. Additionally, some readers may be uncomfortable with Ashton’s graphically described sexual encounters.

Overall, though, this is a compelling look at the repercussions of being gay in a community that sees this as a source of shame—a detailed record of one man’s hurt and healing, while many more with similar stories have yet to speak of their pain.