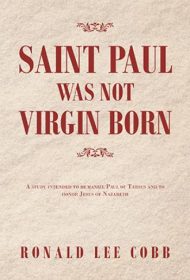 Those who study the New Testament will notice that what we often call Christianity could also be called Paulism, or a religion based more on Paul’s teachings than those of Jesus Christ. Ron Lee Cobb wants to set the record straight: Christianity owes much to Paul, Cobb argues, but ultimately, Christianity is all about Jesus.

Here, Cobb looks to dethrone Paul from the center of the Christian universe. Simultaneously, he wants to put his achievements, insights, tenacity, and flaws in their proper context. He offers readers a series of short, terse chapters that examine Paul’s history, conversion, theology, legalism, and relationships with family and the communities he frequented. Bottom line: Paul put Jesus front and center in his life and teachings; so should Christians.

One of Cobb’s most intriguing sections deals with what some believe are Paul’s anti-Semitic views. Yet, as the author notes, Paul himself was Jewish and a Pharisee, meaning a Hebrew law expert. Paul’s sometimes-heated criticism of Jews was meant to target individuals, not the entire religion. Nevertheless, most notably, Martin Luther used Paul’s letters to craft horrible anti-Semitic writings that led to centuries of Jewish persecution in Europe.

Cobb’s casual, avuncular writing style makes for easy reading. Moreover, his succinct chapters quickly get to the point. Yet, there are times when Cobb’s text could use more framing. For instance, in Chapter 29, more context is needed to connect Cobb’s thoughts with the Bible and the Richard Rohr citations he uses (misplaced quotation marks don’t help). While not a deal-breaker in terms of undermining the book’s insights, such sections can be confusing. Lastly, the book seems a bit repetitive with its message: “It’s all about Jesus. It’s all about Jesus.”

Though not perfect, the book succeeds in making a case for reevaluating Paul. Christians looking for a quick and lively introduction to the differences between Jesus-centered Christianity and Pauline theology will have much to digest here.