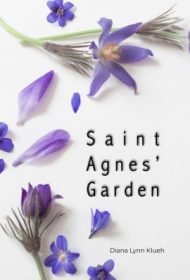 In Diana Lynn Klueh’s novel, Saint Agnes’ Garden, a young girl must leave her friends and adapt to new surroundings after her father leaves her mother and her mother decides to relocate.

In 1952, Jodie Sealy and her mother move to Biloxi, Miss. to live with Jodie’s maternal grandmother, who is critical of Jodie’s mother and deems Jodie a brat. Hoping to straighten out the young girl, Jodie’s grandmother enrolls her in Catholic school.

Jodie worries that her “wild monkey” ways might be to blame for her parents break up, and her father’s drinking, and by sixth grade decides she will become a nun, “the most perfect ladies.” But no sooner does Jodie announce her intentions, then her mother uproots them to move to Indiana with Jodie’s paternal grandmother. There, Jodie is teased for her Southern accent, but she soon finds her place in the class, a mix of the smart and mostly well-mannered and the misfits who struggle to learn and disrupt class. Soon, Jodie is helping those less able students.  She also makes a new best friend in classmate Rita, whose father is in prison for a crime he insists he didn’t do.

But life takes another turn when Rita’s family situation changes, Jodie’s grandmother is hospitalized and her father comes to town.

This is a sweetly told story about childhood and all the questions, hopes and disappointments that come with it. Klueh is particularly skilled at description. Her grandmother’s voice “sounded as though she had swallowed sand.” In describing a nun, she writes: “Everything about her was round; round face, round blue eyes that looked surprised by everything, and a little mouth that puckered to almost nothing.”

While the novel isn’t strong on plot, its descriptions and characterizations make for a satisfying read— one that’s likely to be enjoyed by those who enjoy a tender tale about life in another era.