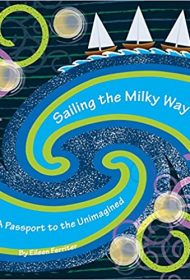 Eileen Ferriter’s Sailing the Milky Way is a picture book that follows a dragonfly on a trip through the cosmos.

The book begins with a young boy in bed. “Before you tuck me in,” he says, “can you tell me the story of Yuri once more?” The narrator then informs readers that “The loving parents of the most precious dragonfly Yuri, [sic] gifted their children with these words each night.”

At this point, the boy drops out, and it’s unclear who is narrating the story: Yuri’s parents, the boy’s parents, or a third party.

The text reads like an uplifting poem, meant to encourage young people to shoot for the stars, enjoy life’s pleasures, and chase after their dreams with abandon. It’s a worthwhile sentiment to share, especially given the world’s current climate. However, much of the language and imagery offer little more than sweeping clichés. For example, Ferriter writes on one page: “Journey to the rainbow’s end and let your spirit float among the stars.” Then, on the next page: “Take in the light and leave the dark behind you as you soar to new horizons.”

The illustrations accompanying these thoughts are highly colorful and imaginative, with swirling lines and a collage-style mix of images. Yuri is featured in many of them, resting on foliage in the middle of The Milky Way, sailing the seas on a ship, hugging the earth with his wings, and more. The dragonfly is given no dialogue or personality but serves only as a visual metaphor for the idea of spreading one’s wings and embracing the world’s joys.

Overall, the author has a noble intent, and after getting past the confusing start, parents of young readers might appreciate some of the book’s affirmations and uplifting tone. But children will likely find it challenging to derive meaning from these many abstractions in a story devoid of plot.