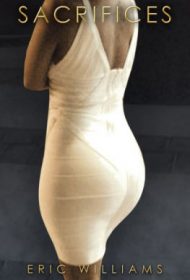 Eric Williams’ novel Sacrifices offers a stark portrayal of the numerous ways a flawed criminal justice system can thrust individuals of color into peril and degradation.

The story features Brock Peterson and Gabrielle (Gabby) Sanchez. Co-habiting in a low-income area of New Orleans, Gabby and Brock are hard workers with a deep love, even while life’s challenges have seemingly put big dreams far out of reach. But their relationship and Brock’s life are on the line after he’s accused of a murder he didn’t commit. Gabby is desperate to do whatever it takes to ensure her man’s freedom as Brock struggles to mentally cope with being incarcerated.

Williams’ heavy use of slang helps ground the narrative in its predominantly urban setting. Gabby’s sister Bella drops sassy quips throughout, like “Oh, you feeling yourself, huh, sis?” Meanwhile, Brock is a believable character whose jail routine—the “noon feed,” a “count at 3 p.m.” etc.—feels authentic.

The women characters, however, suffer from objectification. Bella is a stripper who tries to talk Gabby, with her “banging body,” into stripping as well. And although Gabby is a competent cook who easily lands two jobs to pay the bills once Brock is arrested, her first thought of how to rescue Brock is to seduce a man of influence. The cover, featuring a curvaceous woman from the neck down, is equally off-putting.

Some sentences are ungrammatical and/or puzzling. (When Gabby ends a jail visit, she “looked back to see Brock limited because of his restraints, struggling to put up the phone signal.”) And while the dialogue is generally sharp, the author overwrites attribution, with characters responding “in a nervous manner,” “in a frightened voice,” “in a discombobulated voice,” etc.

Nevertheless, own-voices narratives and urban romances are still relatively rare in mainstream publishing. Despite its flaws, the story features culturally diverse characters, and with its snappy dialogue and realistic drama, the novel is engrossing enough to finish in one evening.