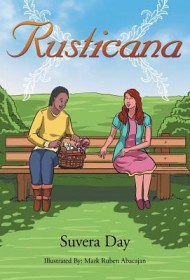 Rusticana is a faith-based children’s picture book that delivers a story of friendship and the impact of prayer.

Young Rosy Adorka lives happily with her family on one of their producing farms in the town of Rusticana. She attends church every Sunday and believes in Jesus Christ and the power of prayer. While Rosy’s family is wealthy, her close school friend Lizzie is impoverished because her father died when she was a baby. Lizzie’s mother is ill, leaving her brothers as the family’s sole providers.

When Rosy learns that Lizzie’s mom’s health isn’t improving, she decides to pray. That night, Rosy is visited by an angel of the Lord who tells her that her prayer will be answered. The next day, Rosy shares the good news with Lizzie and her mother, and Rosy’s family celebrates with a feast attended by Lizzie’s family.

Scripture verse appears throughout the text, seemingly meant to illustrate lessons of the larger story. However, their meaning isn’t always clear. For example, on a page discussing how Rosy loves to chase sheep, a verse from John 10:11-3 notes that a “Good Shepherd” puts the needs of his sheep before his own. Is Rosy a good shepherd or a selfish one? It’s unclear. (The next page recounts a time when farm workers diligently searched for a lost sheep; the verse would have been more appropriate here.) Another verse denouncing vanity appears on a page describing Rosy’s life with her family; the reference to vanity seems random.

Overall, the story lacks character development. Rosy seems near-perfect, and Lizzie, who isn’t introduced until mid-story, also remains one-dimensional. Additionally, the book contains verb/tense inconsistencies, incorrect prepositions (e.g. frequently describing Rosy as living “in,” rather than “on,” a farm”) and the repeated use of the word “then.”

Colorfully illustrated, Rusticana could be a charming tale of faith and friendship that serves to introduce children to Scripture, but it requires revision before it can attract a wide audience.