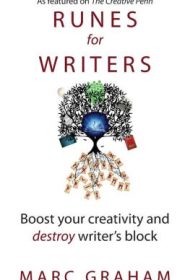 Google “what to do about writer’s block” and you’ll get more than 21,000,000 results—advice ranging from taking a walk to dream journaling. Author and shamanic practitioner Marc Graham makes a compelling argument for runecasting, a technique that he believes can, with patience and practice, bring joy and fulfillment back to struggling writers.

The Runes, 24 Norse symbols, were used in ancient times as a divination system and later, in the first millennium of the Common Era, as the language of the Germanic peoples. They are available today printed on stones, tiles, dice, and cards and are used like the tarot. Graham explains how reading runes can free the subconscious mind to explore the unconscious mind and its deep well of creativity for the story waiting there to be told.

The book’s core is Graham’s colorful explanations of what each rune literally represents and his interpretation of what it can mean in a storytelling context. For example, if you discover the symbol Berkano, meaning birch, in an upright position (representing hope, nourishment, and new life) or reversed (meaning sickness, neglect, emotional distance), this suggests the story and/or character you’re building will be a powerful one of renewal or devastation.

Graham then provides a convincing explanation of how runecasting helps writers get unstuck, drawing on Jungian and Freudian psychology and Joseph Campbell’s study of myth. This would have worked better at the beginning, where it could have reassured readers that what might seem a baffling or improbable way to surface fresh ideas is actually based on credible reasoning.

The book closes with a sample short story annotated to explain how runecastings influenced Graham’s choices.

Graham brings Norse mythology to vivid life throughout Runes for Writers. Those grappling with the toil of writing will find inspiration as they are transported to a place where magic happens.