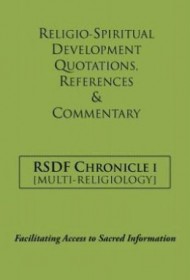 At first blush, Dr. Sekokotla ‘Skok’ Sekokotla’s Religio-Spiritual Development Quotations, References and Commentary sounds a little intimidating. Yet, after reading a few pages it becomes quite clear that the author could have easily called his book Insights on World Religions, because that’s exactly what it is—an examination of some of the universal ideas, basic tenets, and contradictory teachings found in Eastern, Western and African faith traditions.

Sekokotla, a veterinarian by trade and founder of the non-profit organization Religio-Spiritual Development Foundation, covers a lot of material, including tribal paganism, Judaism, Gnosticism, Christianity, Islam and the Vedas. The author’s love for his material is apparent, and he does a fine job compiling thought-provoking information on the world’s many diverse religions while highlighting the underlying truth that is universal in all: that each religion is an expression of a single source, The Ultimate Divine Being (as the author refers to God).

Sekokotla backs up his thesis by referencing many well-known historians, such as Huston Smith (a near-legendary writer on comparative religions) and provides running commentary on the thoughts of many of these influential thinkers. While he covers a wide-breadth of faiths, the most interesting parts of the book deal with the hows and whys of European attempts to colonize, dilute and eradicate primal African religious practices.

Overall, Sekokotla is an astute and thoughtful observer. However, the book could use an editor to help organize his information more efficiently and coherently and it is in serious need of copyediting to avoid confounding sentences such as “He then expanded into the spiritual realm within his expanse and expanded into (created) innumerable living beings…” As it stands, his prose can make for a frustrating read.

Even so, those who are looking for a layperson’s insights on the idea of a Universal God will often find the author to be a gentle and knowledgeable guide.