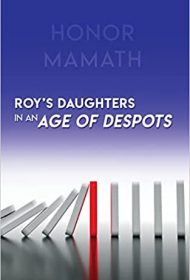 Sarah and Rita Sanders have been brought up in San Francisco, largely by their mother, while their father, Roy, does confidential work for the State Department. When the story opens, the sisters are coming of age in a period of world turbulence and danger. Sarah is married, and awaiting a posting overseas with her soldier husband, while Rita dabbles in activism and grows close to Alejandro, a foreign student whose past is shrouded in mystery.

World events provide an interesting backdrop to the story. Roy is privy to the tensions in the Kennedy administration over the Cuban missile crisis. When Sarah and her husband are posted to West Germany, they experience life in a divided nation.

Despite such potential strengths, however, the novel suffers from several flaws. The challenges the sisters face are realistically portrayed but largely mundane, and stilted dialogue where characters constantly use each other’s names in one-to-one conversations fails to bring them to life. The narrative largely focuses on humdrum detail – what people are eating and drinking for example – rather than exploring any nuances in relationships. Thus, opportunities for drama and tension are missed.

Rita’s storyline is more engaging than Sarah’s. She’s determined to carve a career for herself, and her boyfriend’s past in South America may be problematic. But when Alejandro’s backstory is explained, the scene is anticlimactic. In the latter stages, the story jumps forward in time abruptly. And although the novel’s conclusion settles the questions about Rita’s romantic life, it has no emotional depth. In a confusing epilogue, one sister recounts a troubling scene with their father, Roy, suggesting a more complex family dynamic than is apparent in the preceding chapters.

The novel offers an interesting historical setting, but lack of a compelling plot and character depth make this a disappointing read.