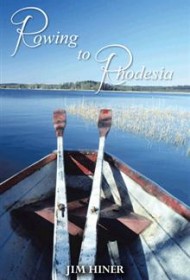 In this brief book, the 91-year-old Jim Hiner packs in literary references (such as “Byzantium” and “darling buds of May”) that attest to a formal education in canonical English poetry.

In several of his poems he begins a stanza with familiar references, as in the first poem “The Back of My Calling Card” which has a section that plays with William Carlos Williams’ iconic poem “The Red Wheelbarrow” and then moves into a more directly metaphysical stance, “So / much deepends [sic] me / from / wade to wallow / a mode much than / of / Performance: / what is all of / why.” In this section Hiner shows his facility with pun, if “deepends” is not a typo but a way to make putting something into the deep end of a body of water into a verb, as well as a visual play on the “depends” from Williams’s poem. He also uses alliteration (“wade” and wallow”; “mode” and “much”) as well as the more subtle use of slant rhyme of “wade” and “mode.”

The metaphysical tone and a gentle commentary on the absurdity of human “getting and spending…late and soon” (Ã  la Wordsworth) characterize a lot of the poems, such as in “Poem for an Afternoon” which uses kinesthetic, spatial, and sonic imagery, “Dance round before rescue / Place what you will / Where you have it / At frequencies no / None of those / That will behold.”

Occasionally the poems or lines lean toward the pedantic and nebulous (therefore less interesting), as in the second half of “La Valse” in which the narrator describes “them” and “Their unprovoked contradiction of all / That law’s embarrassments hold true; / And forgive above all their own deeply held / Conviction of immortality.”

The poems in Rowing to Rhodesia don’t necessarily take a lot of risks but they show a clear-eyed attention to the harmartia (tragic flaw) of intrinsic human frailty.