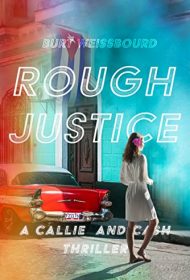 As the novel begins, Sara Cambert, 25, arrives in Seattle, having been approved for a long-awaited green card. But all is not well. Callie and Cash are enjoying a quiet dinner at Callie’s Seattle restaurant when a stranger arrives, demanding to see Cash. The newcomer turns out to be Sara, who reveals that Cash is her father. Soon, it becomes clear that Sara’s life is in danger.

Callie and Cash immediately provide refuge to Sara and enlist their allies in law enforcement to figure out who is trying to kill her and why. The trail leads to immigration lawyer Fanny “Rosie” Rose and entrepreneur Yu Shin Shi, engineers of a lucrative and deadly identity theft scheme.

The novel takes readers from Seattle to New York, Miami and Cuba as Cash, Callie and a motley crew of associates use brains and brawn to protect Sara and defeat Rosie and Yu. Along the way, Sara finds a chance at love, and Cash reckons with his unexpected fatherhood.

With big emotions and high stakes, Rough Justice has the foundation for a compelling thriller. The characters’ intriguing back stories (particularly Sara’s harrowing tales of growing up in a French orphanage) draw readers into the novel.

The execution, however, is problematic. Villains and heroes alike often discuss their plans in detail before executing them, providing too many lulls between action sequences and robbing them of much of their suspense. In the same vein—telling rather than showing—characters frequently talk about how intelligent and articulate Sara is, rather than letting her actions speak for themselves. This greatly slows momentum.

Additionally, the dialogue is often used to offer background information and can seem a bit wooden as a result.

Although Rough Justice has a strong foundation, editing to improve these issues would increase its appeal in the crowded thriller market.