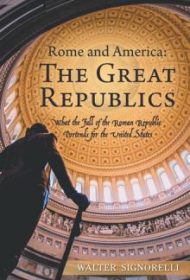 In Rome and America: The Great Republics, Walter Signorelli examines the parallels between the historical trajectories of the Roman Republic and the United States.

Signorelli argues that “[t]he United States of America is the political and social descendant of the Roman Republic.” He focuses on the development of the Roman partisan divide between the populares, who “advocated on behalf of the small farmer” and populist change, and the optimates, who “controlled large estates” and tended to favor the status quo.

Signorelli compares the evolution of the Roman partisans to the transformation of Alexander Hamilton’s Federalist party and Thomas Jefferson’s Republican party, noting that “the parties would change names…[but] they would maintain the same adversarial relationships…[as] the Roman populares and optimates…”

While Signorelli praises the beneficial impact of adopting the Republican system of government, he warns that America must resist “the passions of extreme partisanship, ever-expanding bureaucracy…and the tendency of partisans to put all their faith in a single exalted leader.” Otherwise, he notes, America could devolve into an autocracy similar to the dissolution of the Roman Republic under Augustus.

The author’s reliance on classical sources such as Cicero and Livy reveals the breadth of his research, as do his American references, often drawn from the Founding Fathers’ correspondence and speeches. However, many quotations from sources—some almost a full page— run too long and would be clearer and more effective with editing. Including maps with his discussions of Roman and American military history would also enhance the work’s accessibility.

The book has structural problems as well. For example, Signorelli includes a description of women’s legal and social obligations in the Roman republic, but no corresponding chapter about American women. Jarringly, this discussion immediately follows a chapter analyzing the expansion of executive powers in 20th century America, an odd organizational choice.

Those interested in Roman and American history will likely find this book interesting. However, to appeal to a larger audience, it requires a firmer editorial hand.