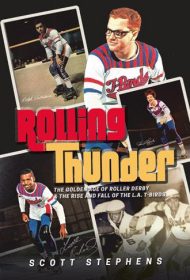 A key component of American “sports entertainment” culture, roller derby has had its ups and downs. It was relegated to niche interest for much of the 1980s and 1990s; its widespread resurgence in the early 2000s was powered by a wave of all-female leagues. It has since regained popularity with players of both genders in upwards of 1,000 leagues across the country.

Scott Stephens’ Rolling Thunder focuses largely on one pivotal chapter in roller derby’s history: the Roller Games league and its flagship L.A. Thunderbirds team in the 1960s and ’70s. From the Roller Games’ first match in 1961 to its decline in the ’70s—along with various revival efforts in subsequent years—every possible detail about the league is enumerated: virtually every team and often its entire roster, lists of celebrity fans, news articles, personal lives of participants. The book is so meticulously researched and reported as to be a virtual encyclopedia.

It also includes a variety of interesting anecdotes, particularly regarding the popularity surge following Kansas City Bomber, a 1972 hit film starring Raquel Welch, and a section detailing how the players trained on specific techniques, such as blocking and jamming and “the whip,” in which one skater propels another forward. The move, he explains, requires not just strength but split-second timing—and every skater must be in excellent cardiovascular shape to survive the banked track.

Readers will find two forewords, an introduction, appendix, references, a “Special Thanks” page, and index. Despite those supplementary sections, the main text of the book still teems with minutiae. While informative, it slows the narrative. A tighter framework relegating the smaller details to appendices would have made the book more appealing to general readers.

Nonetheless, Stephens is an entertaining writer whose passion about this subject is likely unmatched by anyone else. This book is unquestionably a treasure trove for anyone who followed the T-Birds in their prime years and loved the Roller Games as Stephens did.