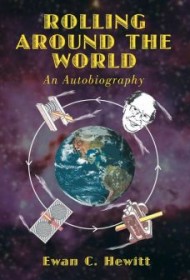 Autobiography, while generally acknowledged to be one person’s telling of his own life story, can approach the subject in myriad ways. Author Ewan C. Hewitt spent much of his life “rolling around the world” as an engineer working in the steel industry, specializing in rolling mills. His autobiography is less one man’s life story than a look at the industry that shaped him, and is better read like a miscellany rather than taken in a single gulp.

Hewitt served in England’s Royal Engineers from 1946 to 1948, which led to schooling at Cambridge and a long career at Davy-United, working on rolling mills. If the concept of a rolling mill is abstract to you, fear not: There are numerous photos and diagrams that may clarify things for you (note: “may”).

Hewitt has a sense of humor and his writing moves at a steady clip. However, unless readers have worked in a similar branch of engineering, much of his information is confusing and difficult to navigate. For example: “Clecim had only built one modern plate mill, at Dunkirk Steelworks, and this had included equipment for back-up roll bending, a technology invented by Maurice Stone at United, which added greatly to the capital and running costs but had been subsequently proved to do very little to improve the profile of the rolled plate.” It’s complex and geared for a niche audience.

We do learn a bit about Hewitt’s life: He’s a jazz aficionado with a particular love for the New Orleans style of playing, and he’s a fan of surprisingly filthy jokes, several of which he includes here.

General interest readers will find Rolling Around the World to be disorganized and challenging, but engineers, residents of Sheffield, and Hewitt’s family and colleagues may be charmed by his recollections.