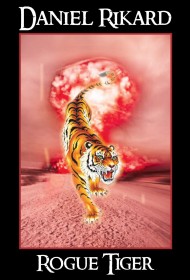 When we hear someone has “gone nuclear,” we assume that’s a metaphor, not a literal description. In Daniel Rikard’s political thriller, Rogue Tiger, however, a megalomaniac Chinese general and his international counterparts make it seem all too real.

Meet General Chen Huan, a protégé of Mao Zedong who has spent a lifetime plotting to take over the world. U.S. President Stephen Thompson believes that the Cold War is over, and that no country would dare to make a first strike. U.S. Naval Commander Paul Krause thinks the President is mistaken. Who is right?

Rikard explores the conundrum of modern nuclear weapons use from a military and political perspective. The military details are authentic and plentiful, from his description of submarine warfare to his ode to strong Navy coffee. Soldiers trade witty banter, but are all business when a crisis hits. Like popular thriller author Tom Clancy, Rikard effectively alternates between high-tension military maneuvers and high-level political talks. The tight relationship between action and explanation keeps the story moving quickly without giving away too much too soon.

Readers who relish details like nuclear warhead technology or Navy SEALS’ night maneuvers will love reading Rikard’s well-researched novel. Sometimes the technological details slow the pace, however, as when Rikard gets bogged down in the dimensions and specifications of weapons. It’s engaging when we feel like we’re right there in the command center of a submarine, but we probably don’t need to know the exact coordinates of every change of course.

Those looking for a deeper, more personal side to the story may be disappointed. General Huan’s pathological personality is apparent, but other characters suffer a lack of development. Some space is given to Commander Krause’s family and relationships, but his life is still a background sketch.

Read purely for entertainment, though, the pages fly by, creating an engaging action movie in the reader’s mind.