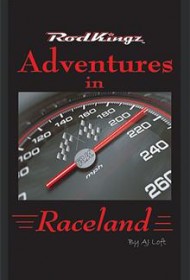 In this fantasy/preteen novel, A.J. Loft has gathered a motley crew of young people who live to race cars in “Sunnyvale USA.”

The “heroes” of the story are Kyle “Lil Mac” McKay and Keegan “Key” McKay, nine and ten-and-a-half years old respectively, and their best friend, a 16-year-old named Lane Change (called Pocket by his friends because he’s so short). The kids attend Hot Rod High, an elite high school that accepts junior racing enthusiasts. While goofing around at school, the kids stumble onto a secret door that leads to “Raceland,” a speedway only for kids where they “morph” into older versions of themselves, able to drive and handle the track.

The book is full of witticisms and preteen (and sometimes adult) humor, with characters named Stanley Toolz and Shelby Haulinbut and Coach Red Cheeks. The kids take classes in Racer’s Ed with Professor Panic and in Pit Stop Strategies with Professor Peach. The action is fast-paced, although at times the reader’s head will be spinning as the book careens around like a racecar zooming along a track. There’s a father-son reunion, a murder, a disappearance, a romance and a theft — and that’s just a few of the subplots. Each chapter ends with a one-line “Life Lesson,” such as “Nothing good ever comes from showing off,” and a QR code to access a mini-clip (which doesn’t seem to be working; we were unable to access it on several IPhones and an Android phone).

The book is the first in a series and apparently the next step in the real-life RodKingz empire, which includes a website, merchandise and games. While readers will admire the author’s cleverness and clear understanding of kid humor, tween-agers who love racing and lively action are the best candidates to go along for this ride.